Starting off as a one-woman theatre show, Fleabag first graced our screens via BBC Three back in July of 2016. It’s writer and star, Phoebe Waller-Bridge, quickly gained a slew of awards and nominations after the comedy-drama’s overwhelmingly positive reception. The show follows the tumultuous life of its protagonist, who- as she is never referred to by name within the show- we affectionately come to know as Fleabag.

Fleabag excited its audiences not only because it was female written, led, and produced, but because its humour and narrative style was something that was very new and invigorating. One of the most memorable aspects of the show is the protagonist’s repeated breaking of the fourth-wall. It added drama and intrigue to the narrative, as well as elevating moments of both humour and despair. We look at Fleabag and she looks back, creating a bond between protagonist and audience that pulls us deeper and deeper into her journey.

The scene I want to look at today occurs in the fourth episode of the show’s second series- the tenth episode out of the shows overall twelve. This scene is often referred to as the “Kneel” scene. But as that is not the part of the scene in question that I want to discuss, for my own purposes, I will be referring to it as the “Confessional Booth” scene. WARNING. As I’m looking at one of the later episodes, this post will contain spoilers for a lot of the show.

At this point in the series, we’ve seen Fleabag face a variety of fuck-ups and awkward situations. Her current plight revolves around her growing romantic feelings for a priest, as well as working through her guilt surrounding the accidental suicide of her best friend, Boo. The scene begins with her entering a church, just on the brink of prayer before she is interrupted by the delightful styling’s of Jennifer Lopez’s ‘Jenny From The Block’ coming from deeper within the church. Fleabag finds the source of the music, as well as her priest desperately reaching for a bottle of whiskey. He offers her a drink and tries, in vain, to break her hard exterior, resulting in the idea to take her to the confessional booth.

Once inside, we see Fleabag in the dimly lit confines of the confessional. Just as we expect of her character, she begins with jokes and jabs, comically refusing to start off the scene with the typical “forgive me father, for I have sinned…” and all the rest. Like most of us when faced with a difficult conversation, Fleabag adopts a lighter tone and makes a joke out of her previous sins- “There’s been a spot of sodomy.. There’s been much masturbation… and then of course the endless fucking blasphemy”. It’s all true of course, but she still laughs awkwardly at the end, retreating back to her glass of whiskey. We know by this point in the narrative- not through explicit words but how the pieces of her story are revealed to us- that Fleabag holds a lot of pain and guilt inside of her. At the beginning of the second season she remarks on how she has changed, and how she has grown as a person. She considers others more now, adding another layer of difficulty onto her ability to talk candidly about herself without cruelty. The priest prompts her gently, and her easy smile begins to fade. She searches for words as we see images of Boo flash across the screen.

The memories start fondly before devolving into Boo’s final moments. The image of the moment before Boo steps into the street is particularly interesting, as we don’t know if Fleabag was actually present for this moment, or if this image is one she has constructed in her head. She is looking directly at the camera— are we, the audience, a witness to her death, or is Fleabag? Back in the confessional, Fleabag is no longer smiling. She’s slouched back against the chair, her glass held close to her chest as she manages to squeeze out one word: “Frightened”.

Even just to admit that one emotion to herself seems to take a great deal of energy. But it’s more than just fear we can see in Fleabag’s face. For me, she is anxious, she is tired, she is just… lost. She’s frightened of forgetting things and people. We know, of course, she means Boo. Perhaps even her mother too. But what else is Fleabag so fearful of forgetting? Does she mean specific things and people, or maybe the combination of all the things and people that make us into a whole person?

This is where the scene hit me. Pieces of Fleabag crumble away and we see that fear. The truth of it. Something I think that we hold within ourselves. She confesses:

This short passage contains it all. As Fleabag delivers this brief speech, it feels as though we— the viewer and her confidant— are trapped in that confessional with her, sharing that intense feeling of wandering blindly through the world. That feeling of being so lost that you feel it deep down in the very bones of your being. Lauren O’Neill writes of this speech:

“Fleabag’s monologue… detailed a type of frustration that is quite difficult to name, because it is so pervasive, and such a fundamental part of contemporary life for lots of young people. It’s hard to get to know who you are when the world around you is changing so rapidly, mutilating into something darker all the time.”

This is a feeling so universal and yet so unique. In every one of us it seems to take a different form, but we all feel it just as intensely from one person to the next. Sometimes, when deep in the clutches of this sort of existential dread, I have thought to myself that perhaps a life in prison wouldn’t be so bad, purely because of the routine. You’re told when to wake-up, what to do, when to eat. You don’t have to put thought into your daily routine. Think of all the pressure of life that would take away! Do I actually want to be in prison? No. Do I hate having a life filled with choices and possibilities? Of course not. I don’t want my life to be like YA dystopia where I am told who I am and what to do, and neither does Fleabag. We’re just so tired of all the pressure, just as Kathryn VanArendonk writes:

“Fleabag basically begs for a God-like figure who can relieve her of the burden of her own agency.”

In a world with so many options and so many things and people to compare ourselves to, it’s easy to develop even the lightest case of imposter syndrome. Fleabag’s words, delivered so poignantly by Waller-Bridge, are a testament to life in the modern age. It’s so easy to feel like you’re doing things wrong. That you’re failing. That you’re not enough. It’s easy to see ourselves trapped in that confessional, just as we’re caged in by all the expectations of life in the 21st century.

And so the scene continues…

Fleabag begs for direction, but in the end all the priest can offer her is physical comfort. A lot of people refer to this scene as the ‘kneel’ scene, referring to the steamy exchange that happens between Fleabag and the Priest just after her confession. It’s hard not to make dreamy eyes at Andrew Scott, but for me, their exchange seems less romantic and more of a distraction. What do you say to a confession such a Fleabag’s? How can you respond? I don’t think the Priest knows how. The Priest who we’ve seen drowning troubles of his own in whiskey- his preferred form of distraction. Fleabag, as we know, leans towards the more physical methods of distracting herself from her thoughts. The moment that they kiss, they’re just two people distracting each other from themselves. 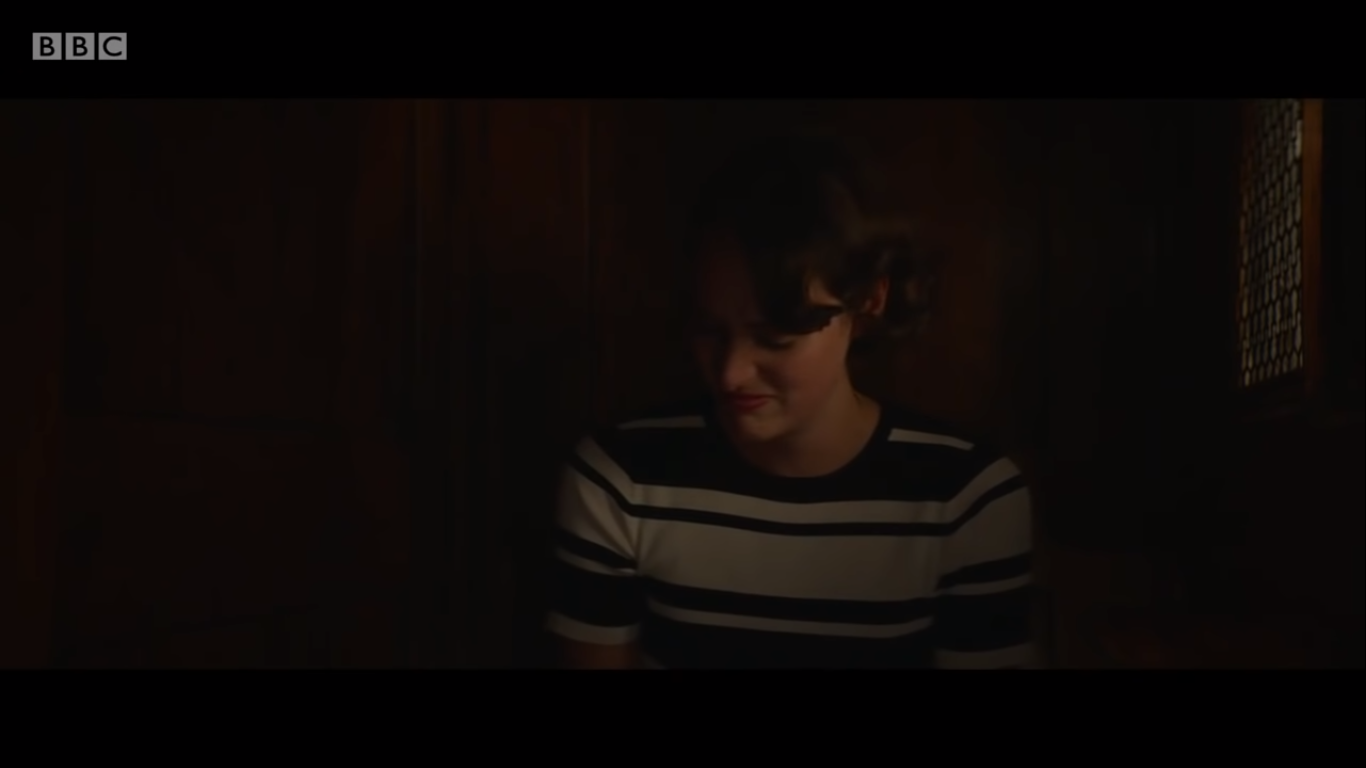 Seeing Fleabag in such a vulnerable light was so compelling to watch. It’s interesting to note that even as she speaks the words, there’s a physical wall between herself and the Priest. She’s opening herself up and yet is still isolated in some way. She doesn’t seem freed by her openness. She seems just as confused as ever, and without the mask of her bravado, most of all she seems… sad.

This scene resonated with me so much because it’s honest. Though we’re watching it on a screen, it doesn’t feel like a performance— it feels like we’re looking in a mirror. I want all of the things Fleabag listed. I want direction. I want purpose. The very thing she feels so lacking in herself as she stares down the barrel of her grief. What is the point in it all? I think that’s what she’s begging to know.

Fleabag in its entirety is a show about loss, about family, about womanhood, and about finding your way. Both at the start of season two and on the very cover of the shows accompanying ‘scriptures’, we are told this is a love story. Cynic that I am, I don’t believe it refers to her misguided but important love affair with the Priest. I think when we meet her, Fleabag sees herself as an utterly unlovable fuck up. But over the course of the show’s twelve episodes, we get to watch her fall back in love not only with herself, but with her life.

Some have compared her asides to prayer, others a kind of therapy. Either way I think the person sitting behind the fourth wall offers Fleabag a sense of solace. Just as she offers the same to us. We are holding each other’s hand through the dark tunnel until she gets to emerge at the end, tear-stained but free.

Next on Scenes From A Life: The Way Way Back – Opening Scene

Fleabag Breaks the Fourth Wall and Then Our Hearts – Vulture: Kathryn VanArendonk

That Fleabag Confessional Scene Was About Much More Than The Show Itself – Vice: Lauren O’Neill

Phoebe Waller-Bridge: ‘I have an appetite for transgressive women’ – The Guardian: Simon Hattenstone

One thought on “Scenes From A Life – Fleabag”